As Heard At Point A

Point A Media's daily meetings inspire interesting conversation. Who needs context when phrases like these arise?

To whom would you A-ttribute the following statements?

"Oh, wait! I have an idea to solve the giraffes don't have arms problem."
"She was professional, though. Just the one snort."
"I'm sorry to squirrels."
"Do you want to be 'Googled' on your terms?"
"Are you making this up?"
"We've got some pretty good straight-up chicken house photos."
"I would eat a sausage split."
"That IS a beautiful stomach."
"There's some competition involved in being alive."
Q. "Is there something cooking in here?" A. "Yes, a turkey."
"You just interpret the world around you completely differently."
"Sorry, it was the condensed grilled cheese, not the toasted."
"Are you good with a chainsaw?"
"We were gonna be astronauts, that's for sure."
"If I ever change my name for witness protection, it's going to be Chester Drawers."
"I'm getting beeped at from all directions."
"She's got no brakes."
"Real life is stinky."
"That guy doesn't look real flexible to me."
"You are not allowed to be in on the jokes anymore."
"I would not buy a used toilet."
"What can we do that's not what we do?"
"'Unicorns' works, too."
"Snot is the new black."
"I'm still trying to figure out what happened to April. I don't remember a full 30 days of it, and I've been sober all my life!"
"Her fur is fantastic!"
"I'm a Kevin Federline fan."
"These grudges aren't going to hold themselves."
"Kendal knocked the sticky note out for me."
"That's a complicated mental flow chart."
"I'll be in charge of the balloon wall."
"She makes Eeyore look like Richard Simmons."
"You really can't help but smile when someone is cursing yet pointing a possum at you."
"The common thread is absurdity."
"You have a bald spot in your fur pants."
"That's your thing...Logic."
"It's not like somebody picked you for the job nobody wants."
"I mean, i'm all for pretending to be a squirrel wearing a bow tie on a bicycle, but there has to be a point."
"I am woman, hear me craft."
"Snot is my Kryptonite."
"I'm hot for bluegrass."
"Nothing says raw sex appeal like a dude in a tiara."
"Just don't touch anything. That's your tutorial."
"If she's having a good hair day in her mind."
"I'm done and now you can't see me."
"Hobby Lobby threw up in my trunk."
"That's about the tenth time someone's said Xanax to me this week."
"Don't operate a bulldozer, whatever you do!"
"How 'bout 20/20 hiney sight?"
"None of that makes sense, but it's poetry and I love it."
"If it's free, there's something wrong with it."
"That's not a logo, it's a collage."
"I think 'someone else is actually getting paid to do this' is the new black."
"My sor di douevres is just so awesome. I'm pretty suave."
"God, if you can't be a ghost in a cemetery, where can you be a ghost?"
"I'm going to travel there by airliner which is what I call my bus."
"THAT'S your thing...logic."
"People who won't eat a sandwich, I don't trust them."
"You have to go to bed before Santa Claus will come."
"I wish I had a bulldozer."
"You spell like a spammer."
"Oh, were you serious about that?"
"She didn't hoop, but he did."
""She puts the sin in synergy."
"That is the hardest feather I've ever seen."
"Christmas is a lifestyle, it doesn't abide by calendar dates."
"You've got to talk to them in the face."
"There were so many 'America' moments we were just wow."
"If you have enough alcohol in your system, nothing else can get in."
"Some people got it at 9 o'clock in the morning."
"He is the gift that keeps on giving."
"Don't be double doing it."
"Things have escalated dramatically in the toilet wars."
"Every day I find more evidence for my theory that people never evolve past 6th grade."
"That's why God made Big League Chew."
"If you eat it all in one bite, it's only one piece of cake."
"That's a string of words I'm having trouble getting together."
"He has reverse sundowners; he has sunuppers."
"That’s a real sentence I, a grown human person, typed as part of the thing I do to earn a living."
"I'm going to his hot chicken preview tonight."
"I love a good howdy."
"Like everyone came back that's still alive."
"My whole life is a nightmare."
"I can ruin everything you like."
"Sweat, tears, blood and sarcasm - that's what it's made of."
"Pineapple juice is an underrated juice."
"This movie is perfectly ahead of its time and of its time at the same time."
"A briefcase is just a smaller, purse-y suitcase."
"I got caught in a clog mob on Halloween."
"These words mean nothing to me."
"I have questions."
"Woo to the hoo hoo!"
"I have my donut principles."
"I just spit out my Jolly Rancher and I don't know where it went." 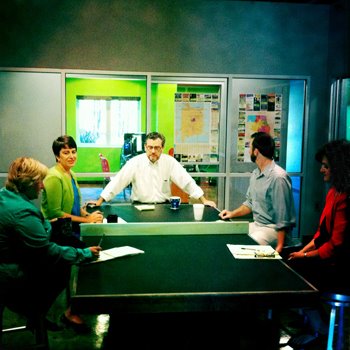 A-Central Overview
Antediluvian Turned Agency
As Heard At Point A