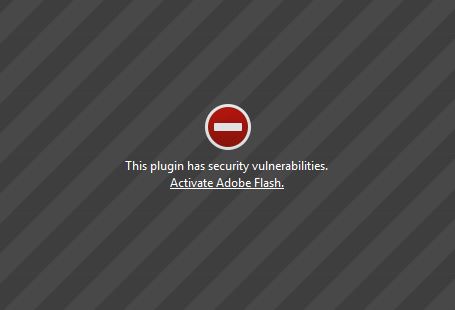 Browsers who use Mozilla Firefox are getting a new look at websites. Monday, the browser, took a direct aim at Flash content. People who choose to view Flash-enabled sites receive this menacing warning: "This plugin has security vulnerabilities."
Mark Schmidt at Firefox shared the news via Twitter on Monday, writing, "BIG NEWS!! All versions of Flash are blocked by default in Firefox as of now. https://addons.mozilla.org/en-US/firefox/blocked/p946 #tech #infosec. "
Mozilla's block applies across all versions of Flash on Windows, Linux and Macintosh systems. The link above directs users to an explanation of Mozilla's security concern with all versions of Adobe Flash up to 18.0.0.203. Additional links to download and update Adobe Flash Player are included. In the meantime, however, Flash remains on the blocklist and Firefox will continue to prevent the plugin from running automatically.
The death of Flash content isn't news to web developers. Point A Media stopped programming in Flash several years ago.  The technology rose with the dominance of Microsoft Internet Explorer. It was used for advanced navigation, streaming video, online gaming and animated content. New programming technologies have replaced this tool and steps taken by Apple, YouTube and now Mozilla Firefox may pull the plug on this once popular plugin.
At Point A Media, we understand new, responsive technologies and we are ready to help you update your site so it is friendly and functional for today's web browsers.