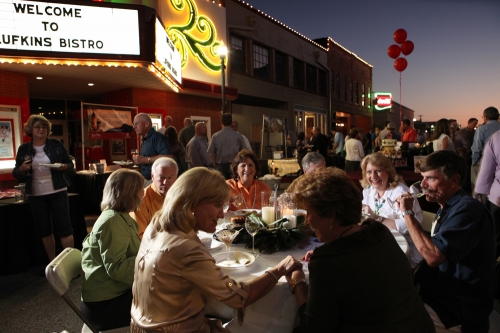 Point A Media has created data-driven, results-focused, event marketing campaigns for many clients. Four years of sell-out crowds mark the success of an incredible partnership with the Lufkin Convention & Visitors Bureau.
In 2011, the Lufkin Convention & Visitors Bureau had an idea for a signature dinner on the streets event that would keep visitors traveling to Lufkin for the Pineywoods Purgatory in town for an extra night. This was an incredibly tough task, compounded by a limited amount of resources for a complete start-up project, but we teamed up with the Lufkin Convention & Visitors Bureau to partner with the producers of Pineywoods Purgatory, create new opportunities through existing relationships with Brookshire Brothers and rally area hotel/motel owners to make it work. Passion, desire, teamwork, creativity and a results-focused commitment to success lead to the branding of Lufkin's Bistro — a totally new, sell-out event in Angelina County.

Point A Media helped maximize available advertising dollars across media platforms. We placed strategic ads with the local newspaper and created a targeted direct mail piece that was sent using a list provided by organizers of Pineywoods Purgatory. To extend our reach, we adapted existing ad schedules with Texas Highways Magazine to include event dates for Lufkin’s Bistro and Pineywoods Purgatory. We created graphics to promote the event via social media and flyers to share information with members of the Lufkin/Angelina County Chamber of Commerce.  Point A Media helped write and distribute more than 100 targeted press releases to media and publications across Texas.

This campaign allowed us to maximize all of the resources in our arsenal while developing win-win relationships with media and community partners. The significance of the campaign was measurable; people knew about Lufkin’s Bistro. Key words used to access VisitLufkin.com proved that visitors to the site were directed by our advertising; “Lufkin Bistro,” was tracked among top referral phrases. Voila! This brand new event was a  branded success!

Lufkin’s Bistro searches directed hundreds of referrals to VisitLufkin.com, surging 76% in 2012 over 2011 and resulting in 23% more time spent on the website each session, 23% more page views, and 69.9% new users of VisitLufkin.com. This project taught us that visitors know Lufkin, but wanted an event to anchor their visit.

With the launch of the all-new VisitLufkin.com, the number one theme searched on the website continues to be centered on events (entertainment, things to do, events calendar). People across the state now know that Lufkin is a place to go to have fun, a place where things are happening; they want to visit Lufkin to be a part of it all, and Point A Media is proud to have a creative hand in the amazing events produced for visitors!

A Final Note:
Ticket sales for Lufkin's Bistro drove the Lufkin Convention & Visitors Bureau to develop a similar, smaller indoor event. Tickets to Corks & Forks are on sale now, but availability is limited. Call 936-633-0349 for tickets to the event on Saturday, January 31.